Public and Private R&D are Complements, Not Substitutes

May 16, 2022 7:21 pm Published by prismatax Comments Off on
Public and Private R&D are Complements, Not Substitutes

Congress is hammering out the details of legislation designed to make the U.S. more competitive with China. Any package to incentivize further R&D should begin by ending the current tax penalty against it.

While the House and Senate-passed versions of the competitiveness legislation differ, they would support American semiconductor manufacturing, increase public funding for research and development (R&D) more generally, and enact a handful of policies directed at strengthening domestic supply chains.

One welcome addition being considered is a restoration of the full deductibility of R&D expenses. As we have written before, as of this year, corporations must spread deductions for R&D costs out over 5 years, instead of taking deductions immediately. Factors like inflation reduce the value of future deductions, creating a tax penalty on R&D and disincentivizing new investment. Our economic model shows restoring full deductibility of R&D (the status quo of the U.S. tax code since at least 1954) would increase economic output and jobs for relatively low long-run fiscal cost.

Both R&D and its tax treatment matter because R&D investment drives technological change and improvement—the ultimate engine of long-run economic growth. Growth, while not everything, matters. Higher growth leads to rising living standards and human well-being. 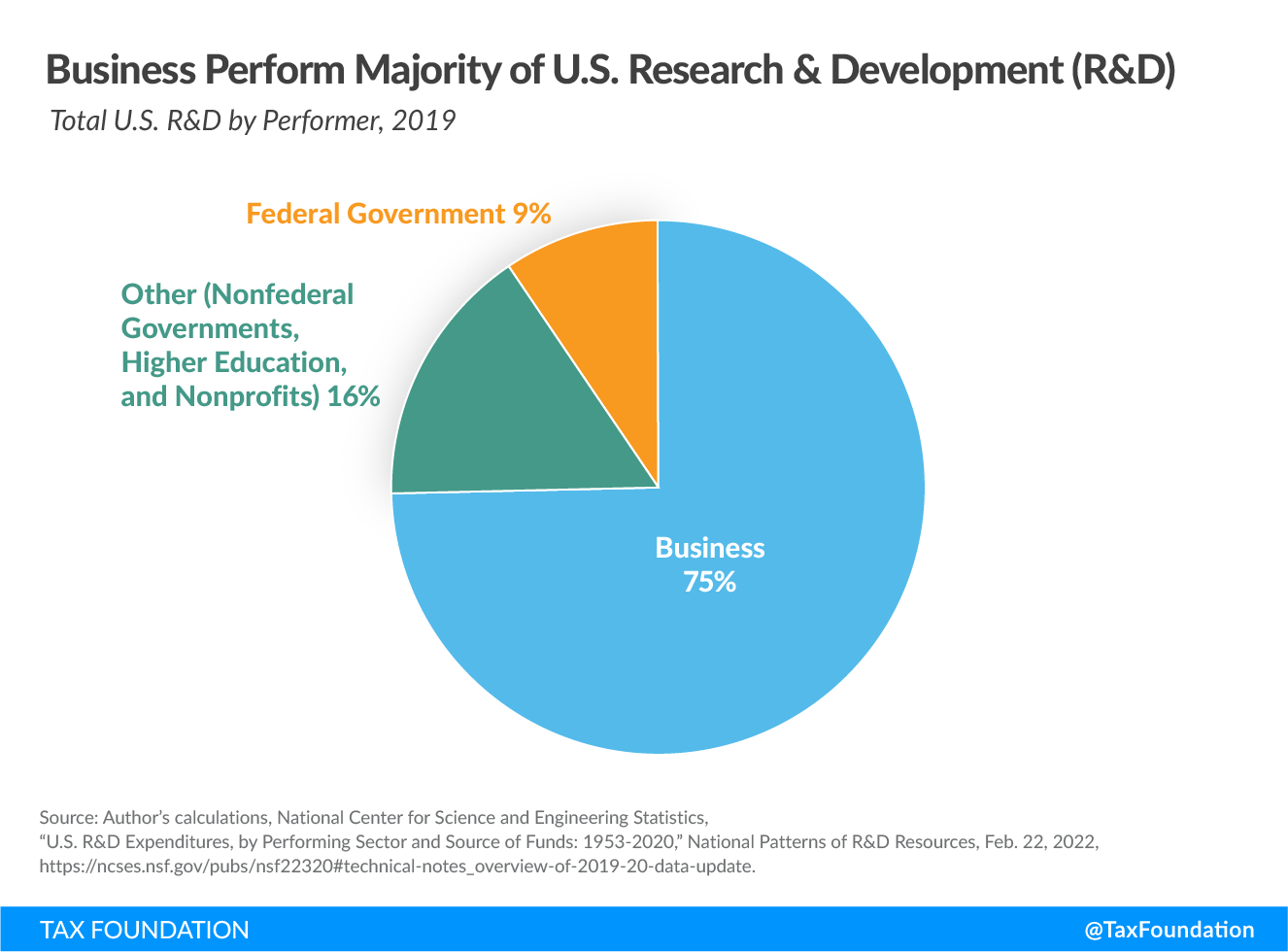 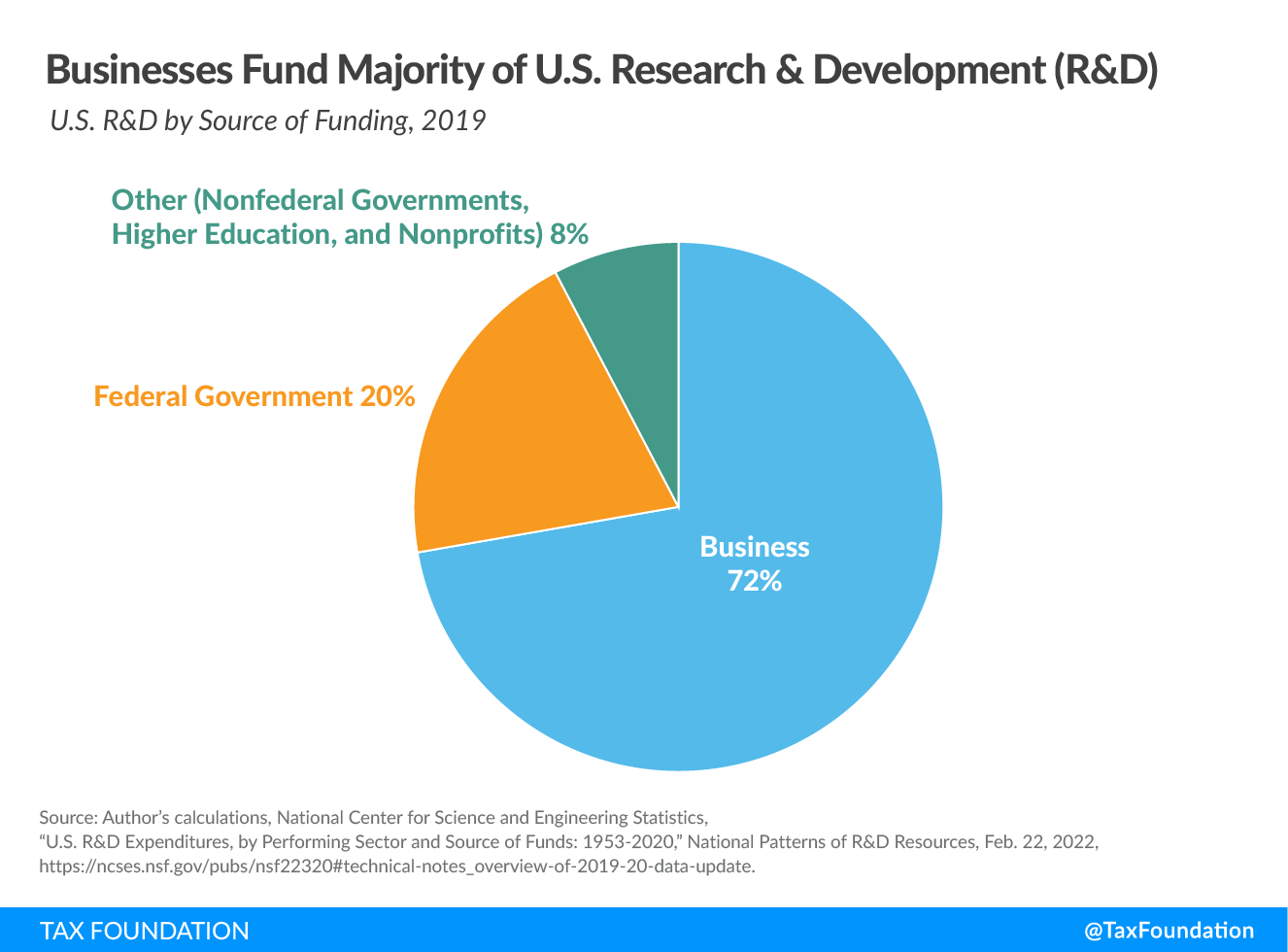 The National Science Foundation’s annual report on R&D further splits it into three categories. Basic research describes “experimental or theoretical work undertaken primarily to acquire new knowledge of the underlying foundations of phenomena and observable facts, without any particular application or use in view.” Applied research is also original investigation in service of acquiring new knowledge, but is “directed primarily towards a specific, practical aim or objective.” Development, meanwhile, involves applying ideas formed from research and turning them into either new products or improvements to existing products. 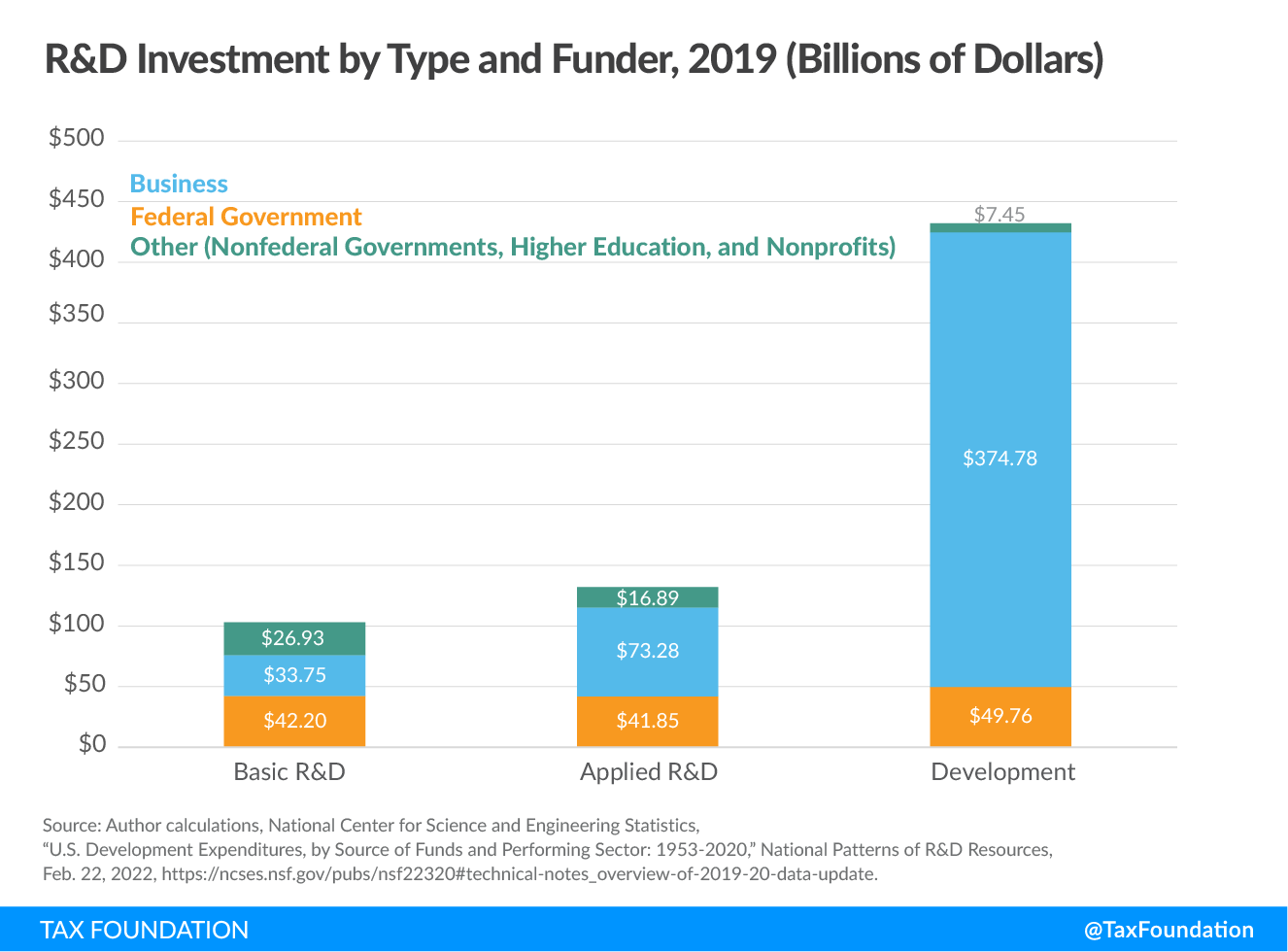 Pitching the two sources of R&D as substitutes is unproductive. Strong evidence indicates the social returns to R&D investment are higher than the private returns for firms, meaning government support can be highly valuable, especially when it comes to basic research.

The results of most government research, however, do not directly improve peoples’ lives. One can point to DARPA, or a variety of consumer products derived from scientific discoveries made by the space program, as a (sound!) justification for government R&D investment. But a key factor is often missing from that line of reasoning: such knowledge typically becomes productive only when private sector R&D turns it into commercial goods consumers want.

We can juxtapose that process with the way science was done in the Soviet Union. The USSR had an enormous science and technology apparatus, including a space program competitive with NASA (although, evidently, not competitive enough) that did make major achievements despite deeply repressive conditions. But USSR programs rarely produced new innovations that improved the lives of Soviet citizens. In fact, Soviet consumer goods were almost universally derided as junk. Thus, public and private R&D should not be thought of as substitutes, but rather as complements.

Turning raw science into useful technological change is where the private sector and private markets shine. Private R&D investment has major spillover benefits, too. As Yale economist William Nordhaus calculated in a famous 2004 paper on business innovation, the producers of technological innovation only capture a “miniscule fraction”—around 2.2 percent—of technological change’s social benefits. In other words, the wealth a tech entrepreneur earns from their business represents a tiny percentage of the contribution they have made to human flourishing. We have both public and private activity to thank for innovation, and it is not necessarily a zero-sum game between the two.

R&D’s large social benefits create a strong case for government support. While it should go without saying, the large social benefits of R&D provide an even stronger case against disincentivizing R&D investment, but that is exactly what current tax treatment of R&D does by requiring firms to amortize R&D expenses over five years.