Cannabis Taxes Back on the Ballot in 2022

While changes to federal cannabis law are slow, changes at the state level are accelerating. Recreational cannabis is on the ballot in five states this November—Arkansas, Maryland, Missouri, North Dakota, and South Dakota—giving voters the ability to join 19 states that have already legalized recreational marijuana. 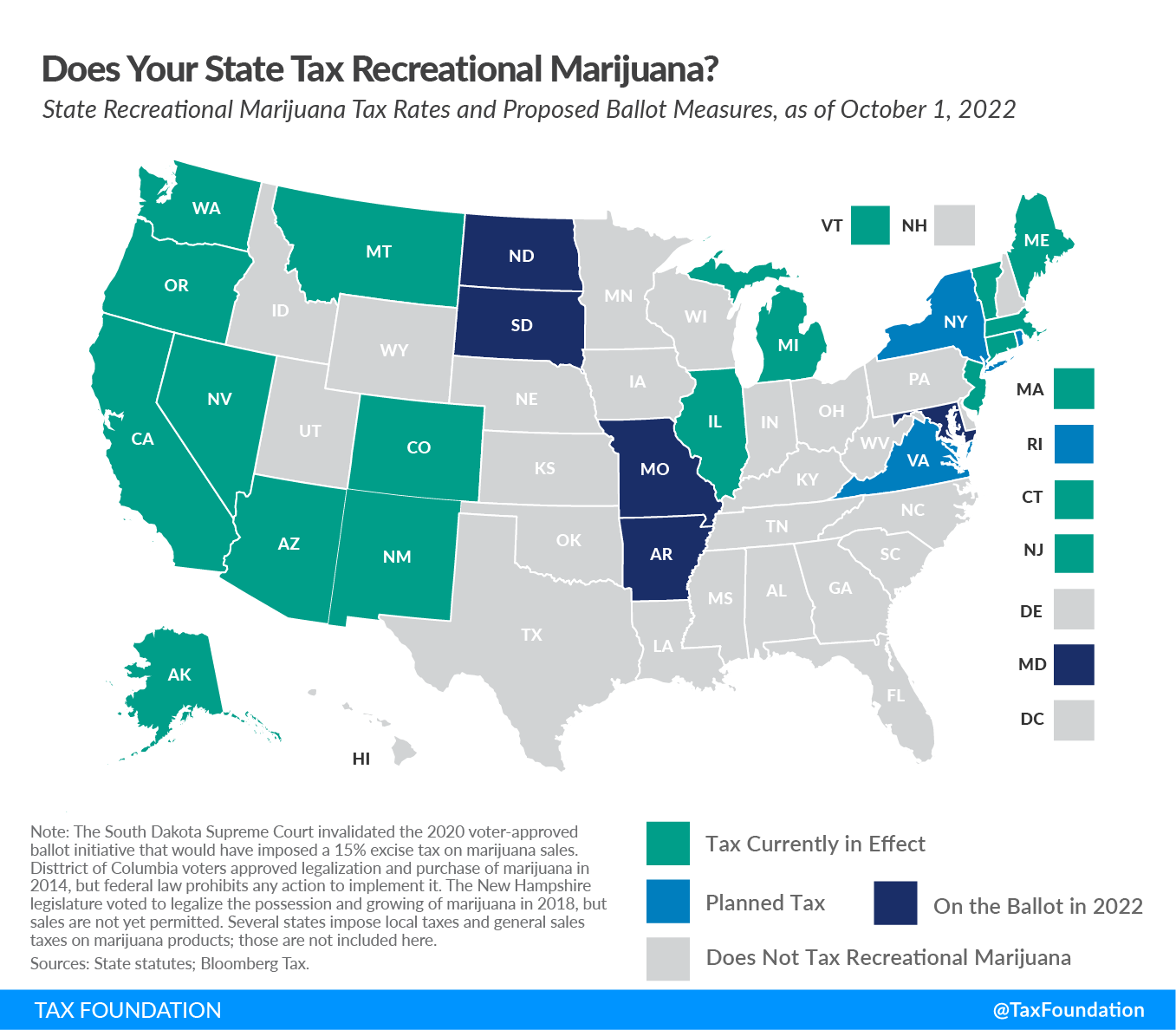 In Arkansas, Issue 4 would legalize the possession and use of up to one ounce of marijuana for adults aged 21 and over. If passed, Arkansas would levy a 10 percent supplemental sales tax on retail cannabis sales.

Maryland voters will decide the fate of Question 4, an amendment to the Maryland Constitution permitting individuals 21 years and older to use and possess marijuana beginning in July 2023. The new amendment would automatically implement House Bill 837 (HB 837), which details legal possession quantities and fines for violating those quantity restrictions, while temporarily expanding decriminalization from January 1 to June 30, 2023.

HB 837 would also automatically expunge criminal convictions for conduct that would be made legal by the new constitutional amendment. Individuals serving time for such offenses would be allowed to file for resentencing.

Question 4 would also direct the Maryland State Legislature to identify and implement taxes and regulations for the new market. At this time, Maryland has not set a tax rate or structure for its cannabis market, nor have any bills identified a licensing or regulatory framework for vendors.

Voters in Missouri will find constitutional Amendment 3 on the ballot in November—one of the most comprehensive marijuana-related state ballot measures. It includes text related to possession, consumption, sales, criminal justice reform, and the tax structure.

If passed, the amendment would remove state prohibitions on purchasing, possessing, consuming, using, delivering, manufacturing, and selling marijuana for personal use for adults over the age of 21. Persons with certain non-violent marijuana-related offenses would be permitted to petition for release from incarceration or parole and probation and have their criminal records expunged. The proposal would enact a six percent tax on the retail price of recreational marijuana. State revenue estimates suggest initial revenues of $7.9 million for the state and $13.8 million for local governments.

In North Dakota, Statutory Measure 2 gives voters the power to legalize the use and possession of up to one ounce of marijuana for adults aged 21 and older. This measure would also allow individuals to grow up to three marijuana plants.

The ballot measure contains a highly controversial and clearly misleading revenue estimate. The ballot fiscal summary reads, “The estimated fiscal impact of this measure beginning in 2023 through the 2025-2027 Biennium is Revenue of $3,145,000 and Expenses of $4,985,000.” Quick math shows this would be a net loss of roughly $1.8 million over five years.

The $3.1 million in estimated revenue comes from anticipated application and registration fees from vendors. Our previous estimate put the revenue potential for cannabis as high as $13 million per year, or $65 million over five years. The misrepresented revenue figure on the ballot creates a strong headwind for the initiative in a state that already rejected a 2018 initiative (Measure 3), which would have legalized recreational marijuana and created an automatic expungement process for individuals convicted of certain marijuana crimes.

South Dakota voters may feel a sense of déjà vu. Voters successfully supported a ballot initiative in 2020 to legalize recreational marijuana. However, that 2020 ballot measure was invalidated in November 2021 by the South Dakota Supreme Court. Voters will now head back to the ballot box for Initiated Measure 27, which would legalize the possession, distribution, and use of marijuana for persons who are at least 21 years old.

Unlike the 2020 measure (Amendment A), which would have imposed a 15 percent tax on marijuana sales, Measure 27 does not address taxation. The official fiscal statement is non-descript, “The State and counties could see a minimal decrease in expenses due to decreased incarceration for marijuana-related offenses, and the State could see marginal additional revenue in the form of new civil penalty fines.” Voters approved Amendment A by an eight-point margin (54 percent to 46 percent), but Measure 27 has clear differences from its predecessor.

Across the country, November will be an important month at the ballot box for both the continued legalization and taxation of recreational marijuana.